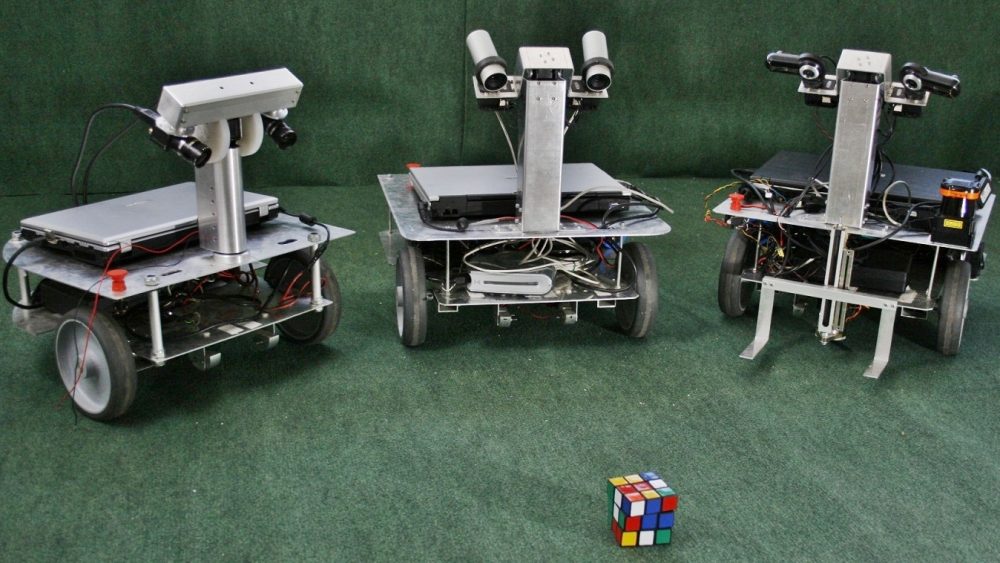 Robex, our new prototype of mobile robot is ready! It is a evolution of Speedy with a new chassis geometry and a new Wifi-N link. Motion is done by two Maxon DC motors with HP encoders.

They are controlled by custom made 3 Amps PWM amplifiers driven by the AtMega32 microcontroller described bellow. This board computes the two PID loops at 2KHz and reads an electronic compass at 2Hz connected through a I2C bus.

The compass and the motor controllers can be coupled in a higher order loop to follow an externally commanded magnetic direction. In the front we have placed a URG Laser -4 meters range and .5 degrees res.- connected also through a USB port.

Other microncontroller board controls the three servos of the steroscopic head that hold two ISight Firewire cameras. Still another one controls a custom made «vestibular» board.

This sensor has 3 accelerometers in orthogonal directions to sense rapid variations in speed. We are currently working on a Vestibular Optokinetic Reflex (VOR)  model and implementation for increasing performance in tracking behavior. A last AtMega32 board controls energy consumption and recharging urgence. This robot is energized by a 12V pack of NimH batteries giving 9Ah, but new designs introduce lighter PoLy batteries with included recharger. A small board with a few relays allows for plug and unplug to external supplies without interrupting its normal functioning.

All these boards are connected via USB to a mini-ITX C3 10000 compatible computer running Linux. The computer is connected via wifi to a powerful desktop cluster. High level control software is distributed among several processors using the Ice communications middleware. This architecture is described in this paper accepted to the MARS-ICINCO-2007 workshop.

We are now building a new, simpler, cheaper and modular version of the robot and of the stero head that will be used by students during next semester. After that extreme test experience we will probably start a Spin-off to distribute the robot for academic and research purposes.